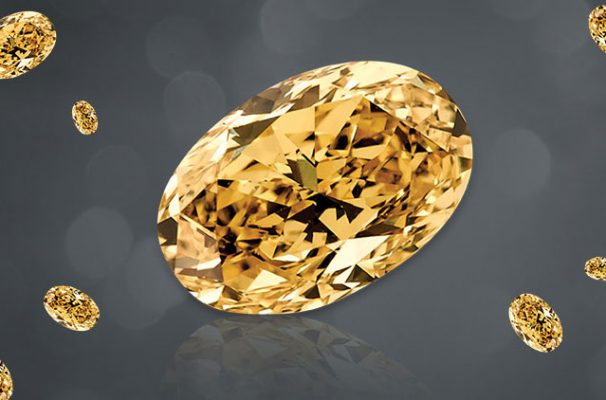 Spend $500 in store for your chance to win. All qualifying customers are invited back to our retail outlet on Angelo Street in South Perth, where you’ll be greeted by a live 3 piece jazz band, food and drinks, door prizes and the chance to have your jewellery cleaned free of charge. Hurry, as the draw closes 1.30pm, Saturday 12th December 2015. See in-store for details.

CHAMPAGNE DIAMONDS
70% of the volume of diamonds mined from Argyle Diamond mine are champagne to cognac colour. Champagne diamonds are graded in colour from C1 (the lightest in colour) to C7 (the darkest in colour, also known as cognac). They, like all other diamonds get their colour and crystal structure from the environment in which they were formed. For a diamond to be champagne or cognac colour, its crystal structure needs to contain the element nitrogen. This element affects the way light is absorbed and so the more this element is present in the crystal structure, the darker the diamond presents.

The Golden Jubilee Diamond, a South African diamond from the De Beers Transvaal Diamond Mine found in 1986, is the most well-known and world’s largest faceted Champagne diamond. Before it was cut, it weighed 755 carats and after it was cut and polished it weighs 545.67 carats. Gabi Tolkowsky was carefully selected by De Beers to cut the Golden Jubilee diamond. It took two years to complete the cutting process.

This diamond was presented to King Rama IX of Thailand in 1997 to honour his 50th anniversary of his coronation. The majority of the Thai public were unaware that the large golden stone the king had received as a gift, was actually a diamond. It was decided that the Thai public should have the stone described to them as a large golden topaz, to avoid public upheaval since the stone was accepted as a gift in the same year that the Asian economic crash began.

The stone has been described as the size of two chicken eggs, and is said to measure 53.66 x 49.20 x 34.3mm. Try putting two chicken eggs in your hand, and imagine very hard they are a diamond. If your imagination doesn’t quite cut it, you could always enter our Christmas competition for a chance to win your very own 1.07ct. Argyle Champagne diamond.